Banbury is a popular and attractive market town situated on the banks of the River Cherwell. Its central location in the heart of the UK has great access links to both London & Birmingham. Dating back to as early as the late 5th century, the Saxons settled in Banbury where it was known as “Banesbury”.

Play & Leisure had the opportunity to tender for a fantastic new play area in a existing park already popular with sports enthusiasts and dog walkers. Our aim was to provide various items of play with maximum play value to stretch the minds of the local children of all ages and abilities. It was only a few weeks later that we received news that our design had won the vote from the council and manufacture of the equipment started.

Installation work started in October, excavation of the ground in readiness for the new play equipment and safety surfacing to be installed. Unfortunately, during the torrential rain storms at the end of last year, there was no alternative but to stop work temporarily as the whole area had flooded. Play & Leisure however never gave up and constant checking of ground conditions took place until work could resume (and after working together with the council to agree a slight change in groundwork preparation to help against ongoing flooding).

The play area was split into three area with the Toddler Area featuring our Derwent Toddler Multi-play, the ever popular and flexible Nattertube, Swings, a Sit-in Spring Animal and a Trisaw Spring Seesaw. The Junior Area comprises of a special Hybrid Quest Multi-play Unit complete with a Wide Slide. The Junior Plus Area comprises of our new Storm Roundabout, Cantilever Swing and an Aerial Runway with its own Launch Platform. All three areas surround our new Inclusive Thunder Roundabout, which acts as the central focal point with associated pathways. Seating, Benches available for users were supplied either for relaxing or taking a picnic.

All the hard work between Play & Leisure, Banbury Town Council and the local residents has ensured that Moorfields Park is one of the flagship play areas for the town. 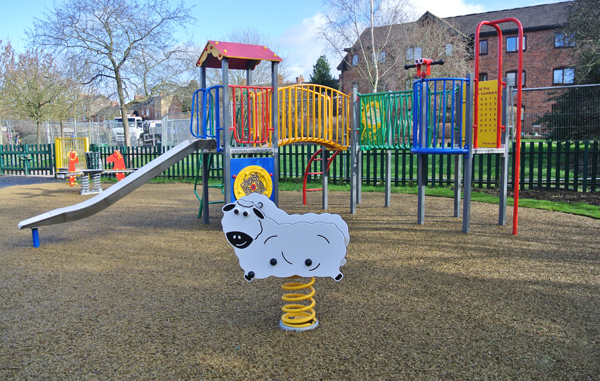